Police departments across the country are grappling with how best to protect their communities and officers with limited resources. 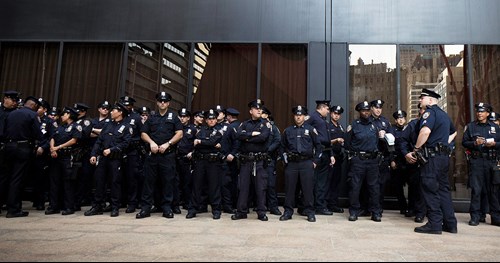 Police strained as forces are reduced in hard-hit areas

Police officers and first responders are scrambling to respond to the COVID-19 crisis, especially in hard-hit areas like New York City and Detroit, CNN reports.  The virus has led to reduced workforces in both cities, forcing a shift of resources and people between departments. Police departments and sheriff’s offices have also limited in-person response calls to emergencies and arrests for low-level crimes in an attempt to keep jail population sizes down. CNN notes one factor that has helped police officers: a decrease in crime due to people staying home.

More than 1,400 New York Police Department (NYPD) employees have contracted COVID-19, including over 1,000 officers, according to CNBC. Of it’s 36,000 employees, the department had around 6,100 uniformed officers call out sick in just one day at the end of March. Meanwhile, 911 calls continue to increase. An ongoing concern for officers is the lack of protective equipment such as masks and gloves, which the New York City Police Benevolent Association noted in a complaint filed in March. New York City has been considered the “epicenter” for the virus outbreak in the United States. At the time of the CNBC article publication on April 1, Johns Hopkins University reported NYC had 43,119 people infected and 1,096 killed from the virus.

A violation of coronavirus-related social distancing can lead to arrest, but it’s the last thing police officers want to do right now, explained International Association of Chiefs of Police President and Buffalo Grove III Chief Steve Casstevens in an article published by ABC News. Police will use their own discretion in each situation considering their limited resources. There have been several arrests made throughout the country as individuals have violated the social distancing government mandates, including a man who held a bonfire at his home with about 60 people, a pastor who continued to hold services, and a bar operator who didn’t close down after an order against nonessential gatherings.

Police departments have had to get creative when it comes to coronavirus preparedness due to a lack of protective equipment and national standard for how to handle a caller with COVID-19, according to Joce Sterman and Alex Brauer from Sinclair Broadcast Group in an article published by WWMT. A police department in Baltimore County, Maryland has taken several steps to protect their officers and community members. The department is sharing videos with the public to demonstrate how they will look when they respond to a 911 call that has a potential COVID-19 connection, and they’ve created a “STRIKE Team” to handle all calls related to coronavirus. More than 80 School Resource Officers who lost assignments due to school closures have joined the task force. Despite the proactive initiatives, the department shares growing concerns around limited protective equipment available to officers.

Police officers specialize in responding to disaster, but the coronavirus is unknown territory, John Rivera, former Miami-Dade PBA president, told CBS Miami. An especially difficult adjustment for officers has been social distancing six feet apart in a profession which requires “human-to-human interaction.” The global pandemic is an “unknown monster” they were never prepared for, Rivera said. The DOJ announced last week it will make $850 million available to help public safety agencies respond to the challenges caused by the pandemic.