The future of infrastructure investments: Speakers weigh in prior to their featured session at the FRA Taft-Hartley Benefits Summit

Michael Underhill, Jim Maloney, and Mike Claridge will discuss the importance of infrastructure investments at FRA's Made in America 2020: The 17th annual Taft-Hartley Benefits Summit.

Infrastructure is everywhere, not just in the roads, bridges, water mains, and power lines we rely on every day, but in the investment world as well. 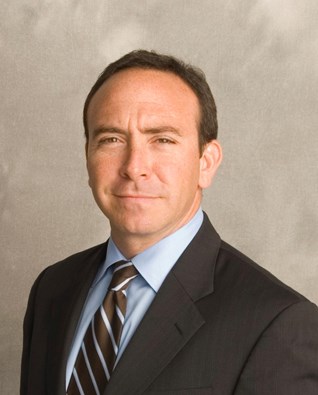 “Is it going to help? I think so, because it’s better than no one investing,” said Underhill, co-founder and chief investment officer of Capital Innovations, LLC. “Is it going to be efficient? Probably not.”

Underhill prefers private sector involvement, and he points to the American Enterprise Institute’s inflation chart (see below) covering a 20-year-period from December 31, 1998 to December 31, 2018 as corroboration. “The greater the degree of government involvement in the provision of a good or service, the greater the price increases over time,” he said, citing hospital and medical costs, college tuition, childcare with both large degrees of government funding and regulation, and large price increases vs. software, electronics, toys, cars and clothing with both relatively less government funding and regulation and falling prices.” 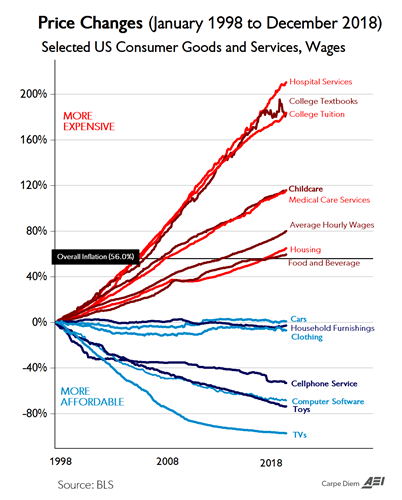 The debate over investing in private vs. public assets is just one piece of the increasingly complex infrastructure puzzle, where public and private capital, and government and private sector involvement can often entwine.

To help separate the signal from the noise in the world of infrastructure investments, Underhill, author of The Handbook of Infrastructure Investing, will moderate the session, Investing in Infrastructure: Advocacy, Workforce, Smart Money, at the  Made in America 2020: The 17th Annual Taft-Hartley Benefits Summit, which will take place January 19-21 at the Bellagio Hotel and Casino in Las Vegas. Joining him on the panel are Jim Maloney, director-at-large of the Illinois Public Pension Fund Association (IPPFA), and Mike Claridge, head of forestry & agriculture and member of the executive committee for The Rohatyn Group (TRG), an asset management firm specializing in emerging markets.

The attraction of infrastructure 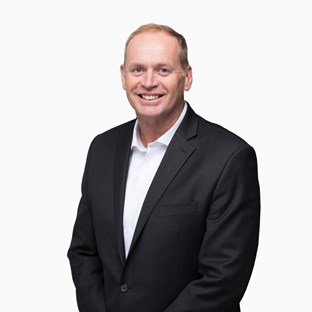 Drawing on his background as a forester, Claridge (pictured left) oversees TRG’s forestry and agriculture investments. He notes that in recent history, the timber industry has become less extractive and more sustainable with a push toward plantation forestry. The focus on plantation timberland makes investment in forestry infrastructure a stable and attractive addition to a portfolio.

“Given the consistent demand for timber products there is predictable growth,” Claridge said. The return on timberland has low volatility with a low risk of loss relative to other asset classes, he added.

As an asset, plantation timberland is unusual because it’s not correlated to equity. “In fact, it’s not correlated to much of anything else,” Claridge said. A large part of that drive, he said, is due to biological growth, which is uncharacteristic of almost any other asset class. “You have the option to hold onto the forest, which will continue to grow,” he said, adding that as forests grow, the logs get larger and their value increases. “They move from one product class into a higher value product class because the larger a log, the more you can do with it from a processing perspective,” he said. Timber investments are also like bonds, in that they can provide regular cash coupons by monetizing merchantable timber through harvesting.

Maloney, a former trustee for the Chicago Policemen’s Annuity and Benefit Fund as well as a retired lieutenant on the Chicago Police Department, calls himself a big fan of infrastructure. He currently focuses on trustee education regarding pension fund management for the IPPFA. Maloney notes that the IPPFA is currently working on legislation for pension funds to have first right of refusal in investing in their local infrastructure deals. To illustrate the attractiveness of infrastructure, he points to investments in innovative programs undertaken by the city of Chicago, including privatized parking meters and the Chicago Skyway, a toll road operated by the Skyway Concession Company, LLC, which assumed a 99-year operating lease in 2005 that gave the city a $1.83 billion-dollar cash infusion.

“Usually with an investment like that, you have control,” Maloney said. “You can raise the tolls or the parking meter fee, so you practically control what your return is going to be over time.”

Global listed infrastructure as an asset class appears poised for a promising future with strong growth potential, according to Underhill. “In many developed countries, we have aging infrastructure that requires repair or complete replacement. In contrast, in emerging markets, there is a need to build new infrastructure to meet population growth, economic expansion, and urbanization trends,” he explained.

Investors in Australia and Europe have been incorporating private and listed infrastructure and real assets in portfolios to diversify across the liquidity spectrum and prepare to face the next great financial crisis, Underhill said. Blending both listed and unlisted real assets affords a multitude of benefits as can be seen in Table 1 below.

Source: The Handbook of Real Asset Investing 2020 by Michael Underhill 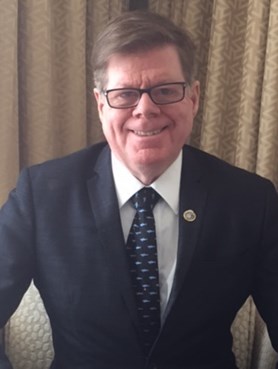 “When you talk about that correlation and diversification, are you truly getting that with a listed product,” Maloney wonders. “I’d have to be sold on it.”

Any investments that are made in infrastructure generate income, according to Underhill. He points to utilities such as water, wastewater, and communications, where people pay their bills regularly. Here the underlying projects generate cash flow on a daily, monthly, or weekly basis. There’s a degree of cash flow yield income that’s paid to the investor from the assets’ operations, he explained, and these assets typically have escalators in them that keep pace with the price of inflation. “Simply said,” Underhill asked, “have you ever seen your water or electric bill decrease?” Infrastructure investments such as these provide income, inflation protection, and diversification, he explained, because even in a financial recession or depression, people continue to flush their toilets and take showers–at least we hope they would.

According to the Handbook of Infrastructure Investing, for every billion dollars that’s invested in infrastructure, 42,000 jobs are generated, Underhill explained. Infrastructure is a bigger draw today than it was five or 15 years ago, he said, because today’s investors are focused on environmental, social, and governance (ESG) factors. Proper alignment of ESG factors while simultaneously meeting labor protection agreements and responsible contractor policies is a match made in heaven, he said.

“There are separate managers in all of our jurisdictions, and they all employ significant numbers of people in the rural of environment,” Claridge explained. In addition, much of TRG’s forest products are supplied to processing centers, where they are turned into paper products or lumber. Those centers also employ a significant amount of people, according to Claridge. In addition, the forestry industry also contains a wide range of ESG benefits. In 2018, TRG estimated that their global forest investments captured 3.4 million metric tons of carbon dioxide, considerably more than natural forests on an area equivalent basis.

For his part, Maloney hopes that audience will come away with a better understanding of infrastructure—what it is and how to invest in it. Do they want to dip their toes in the water with a listed infrastructure product or a typical long-term investment in infrastructure? The answer, he said, depends on their asset allocation, their asset liability, and what they’re looking to accomplish.

The goal for any investor is, of course, a diversified portfolio.

“[That] portfolio should include communications infrastructure that will capitalize on the forthcoming 5G phenomenon,” Underhill said, referring to the fifth generation mobile network that will be significantly faster in placing calls, sending texts, getting online and more, “then a nice compliment of water and waste water infrastructure, some additional transportation infrastructure as well,  and last but not least, renewable energy.”

Made in America 2020: The 17th Annual Taft-Hartley Benefits Summit will take place January 19-21 at the Bellagio Hotel and Casino in Las Vegas. Click here to see the full agenda and registration information.